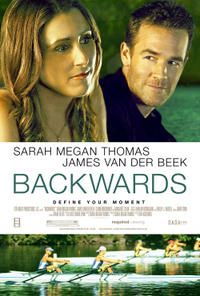 Looking for movie tickets? Enter your location to see which movie theaters are playing Backwards near you.

Abigail Brooks (Thomas) has spent her lifetime trying to win an Olympic rowing medal, sacrificing friendship, love, and a "normal life" along the way. When she is named an alternate on the Olympic team she quits in haste. Defeated, Abi moves back home with her widowed, workaholic mother (Margaret Colin). Tension builds as Abi's mother urges her to "move on" from the rowing life that Abi's father, a coach, introduced her to. Unable to do so, but needing an immediate job, Abi seizes an open crew coach position at her alma mater, Union High. There, the head of athletics is her old boyfriend, Geoff (James Van Der Beek). Abi trains her high school rowers in an obsessive fashion, taking two girls, Hannah (Alexandra Metz) and Susan (Meredith Apfelbaum), under her wing. After the girls lose an important regional race, Abi reinvents herself as a coach, and, in the process, learns to have fun again both on the water and off.