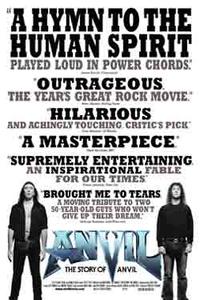 Looking for movie tickets? Enter your location to see which movie theaters are playing Anvil! The Story of Anvil near you.

<em>Anvil! The Story of Anvil</em> is a timeless tale of survival, and the unadulterated passion it takes to follow your dream, year after year. The story follows Steve “Lips” Kudlow and Robb Reiner and their heavy metal band, Anvil, which released one of the heaviest albums in metal history, 1982’s Metal on Metal. The album influenced an entire musical generation of rock bands, including Metallica, Slayer, and Anthrax, who went on to sell millions of records. Anvil, on the other hand, took a different path—straight to obscurity. A wonderful and often hilarious account of Anvil’s last-ditch quest for elusive fame and fortune, the film features appearances by an array of heavy metal icons, including Metallica’s Lars Ulrich, Guns N’ Roses’ Slash, Anthrax’s Scott Ian, and Slayer’s Tom Araya, among others.