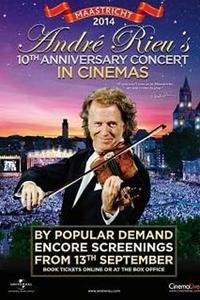 Looking for movie tickets? Enter your location to see which movie theaters are playing Andre Rieu's Maastricht 2014 (10th Anniversary) Concert near you.

The King of the Waltz stages a spectacular anniversary concert in the Netherlands' most romantic city square. Hugely popular Dutch violinist and composer Andre Rieu regularly features alongside top rock and pop bands as one of the world's highest earning touring acts. Each year, the maestro comes home to Maastricht for his legendary summer evening concert series, which attracts audiences from around the globe. As 2014 marks the 10th anniversary of these fabulous events, Andre is pulling out all the stops to make this show his most dazzling and memorable to date.