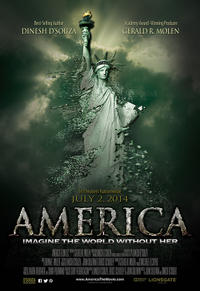 Looking for movie tickets? Enter your location to see which movie theaters are playing America (2014) near you.

Gerald Molen, the Academy-award winning producer of Schindler's List, and Dinesh D'Souza, the creator of 2016: Obama's America, invite you on a journey of discovery that will bring you face-to-face with the heroes who built America, in the times in which they lived, bled, and sacrificed in order to build a great nation: Christopher Columbus, George Washington, Abraham Lincoln, Frederick Douglass, and others. You'll be there as Columbus sets foot on American soil, as bullets whiz by Washington's head, as Douglass demands that America live up to the promises of her Founding Fathers, and as Lincoln sacrifices thousands of lives, including his own, to right a great wrong of history. We'll also meet their present-day critics, hear their stories, and then let you decide which America you believe in. From the team that created 2016: Obama's America comes the story not of a man but a nation, at the crossroads of hope or disaster, whose destination will soon be decided.