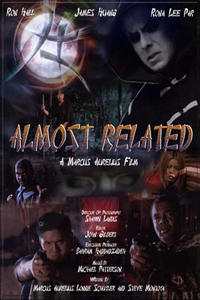 Looking for movie tickets? Enter your location to see which movie theaters are playing Almost Related! near you.

A series of bizarre murders, forces an American cop, Jack Smith, and his brother and partner, Nick Johnson, to team up with a mysterious Asian man, Nathan Nett, who claims to be an FBI agent, specializing in Martial Arts. As the murders continue to mount, Nathan’s identity and credibility begin to diminish as Jack and Nick, begin to suspect that Nathan may be the actual killer. The three uneasy partners find themselves on a quest for three Sacred Scrolls that lead them on a perilous journey into the world of ancestral mysticism to face a ruthless killer who will stop at nothing to fulfill an ancient deadly prophecy.