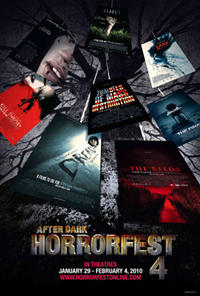 Looking for movie tickets? Enter your location to see which movie theaters are playing After Dark Horrorfest: Zombies of Mass Destruction near you.

In ZMD, a conservative island community is under attack! Port Gamble, Washington is being overrun with braineaters, and the people seem powerless to stave them off. A rag tag band of rebels led by Frida (Janette Armand), an Iranian college student suspected of being an Iraqi terrorist, and Tom (Doug Fahl), a gay business man who has returned to town with his partner to come out to his mother, tries to turn the tide and push the invading hoards of undead back.