A Walk Among the Tombstones Synopsis Favorite Theater Button 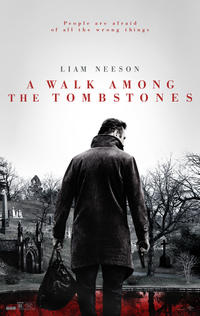 Looking for movie tickets? Enter your location to see which movie theaters are playing A Walk Among the Tombstones near you.

A heroin trafficker whose wife was abducted and murder hires a haunted private investigator to track down the men who killed her in this brooding crime drama starring Liam Neeson. Matt Scudder (Neeson) was an NYPD cop having a quiet drink in a Washington Heights bar when a pair of armed robbers came in guns blazing. Giving chase, Scudder guns down the robbers in the street, though a stray bullet turns a heroic moment tragic. Devastated, Scudder subsequently goes to work as an unlicensed private detective, working just outside of the law and surviving on generous gifts offered in exchange for his services. Now, tasked with rooting out the sadistic thugs who brutally murdered the wife of a wealthy drug dealer (Dan Stevens), Scudder scours the bars and back alleys of New York City in search of his elusive targets - and the closer he gets, the more apparent it becomes that they are something much more sinister than your typical kidnappers.