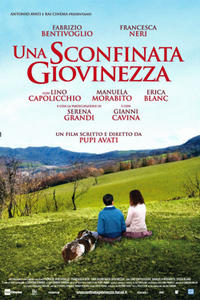 Looking for movie tickets? Enter your location to see which movie theaters are playing A Second Childhood / 20 Cigarettes near you.

A SECOND CHILDHOOD (UNA SCONFINATA GIOVINEZZA), 2010, Rai Trade, 100 min. Dir. Pupi Avati. When Lino (Fabrizio Bentivoglio) is diagnosed with a degenerative illness that severely affects his memory, he slowly begins to disassociate from the present. His wife Chicca (Francesca Neri) considers leaving, but ultimately decides that standing by her husband, and even sharing his regression from reality, is what she wants most. A moving love story. <br /> 20 CIGARETTES (20 SIGARETTE), 2010, Cincecitta Luce, 94 min. Dir. Aureliano Amadei. Aureliano (Vinichio Marchioni), an anti-war activist, is flown to Iraq to be assistant director on a film about the Italian military “peace mission.” Before he can finish a packet of cigarettes, Aurelio is in the midst of the November 2003 attack on the Nassirya army barracks. The only civilian to survive the attack, Aureliano is seriously injured but manages to get himself to safety – and becomes an accidental hero.