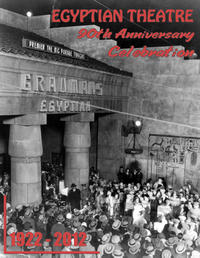 Looking for movie tickets? Enter your location to see which movie theaters are playing 90th Anniversary Event: Masquerade Ball near you.

Join us for an evening of 1922 style entertainment including silent short films (including some Egyptian theme novelty films), vaudeville acts, live up-close magic tricks, dancing to premiere vintage orchestra, Dean Mora’s Modern Rhythmnists, make your own Hollywood Screen Test, enjoy 1920s libations, a buffet fit for King Tut, gaming n our speakeasy gambling den, docent-led tours of the Egyptian's private spaces and more exotic entertainment than you can fathom! Come as your favorite Hollywood icon of the 1920s, an Egyptian fresh off the set of THE TEN COMMANDMENTS or an early 20th century explorer of Egypt. Full menu, costume resources and other information will be available online!