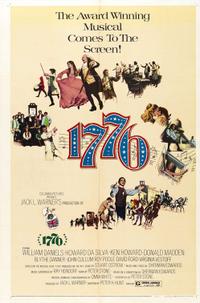 Looking for movie tickets? Enter your location to see which movie theaters are playing 1776 near you.

The nation's fathers harmonize their way through the founding of America in this musical adapted from a popular Broadway show. Colonial representatives gather in Philadelphia with the aim of establishing a set of governmental rules for the burgeoning United States. Benjamin Franklin (Howard da Silva) and John Adams (William Daniels) charge Thomas Jefferson (Ken Howard) with the work of writing a statement announcing the new country's emancipation from British rule.