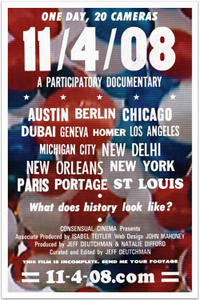 Looking for movie tickets? Enter your location to see which movie theaters are playing 11/4/08 near you.

Two weeks before the election of Barack Obama, filmmaker Jeff Deutchman asked his friends around the world to record their experiences of 11/4/08, a day that had become “historic” before it had even taken place. He collected footage from a combination of passionate amateurs and acclaimed independent filmmakers, including Henry Joost (Catfish), Margaret Brown (The Order of Myths), Joe Swanberg (Alexander the Last) and Benh Zeitlin (Glory At Sea). In this vérité documentary, we see the results of that project: in St. Louis and Austin, idealistic volunteers think they can turn their states blue; in Chicago, voter lines are made even longer when Obama shows up to cast his own vote; in Alaska, children seem to be as invested in the election results as their parents; in Paris, an organization discusses whether there could ever be a black President of France; and in Dubai, Berlin, Geneva and New Dehli, expatriates express their emotion from a distance.